Scroll down for Purchase Info

For many Australian’s, superannuation represents quite a significant asset.  As such, it needs to be considered as part of the property pool during a marital or de facto separation.

Part VIIIB of the Family Law Act allows couples to split their superannuation as part of the property restructuring process following separation, meaning super can be divided between separating couples just like any other asset.  This applies to married couples as well as de facto couples, including same-sex couples.

In order to effect a super split, the trustee of a superannuation fund is empowered to act on the following documents, which detail the split:-

A Superannuation Agreement is an agreement made in accordance with Part VIIIB of the Family Law Act to flag or split a superannuation interest.

Your superannuation agreement must form part of a Part VIII A financial Agreement, (sect 90MH and 90MHA). In other words – the super agreement is a collection of provisions that are contained within a standard Financial agreement.

What’s the difference between a standard Financial Agreement and a Superannuation Agreement?

By using this Superannuation document, the parties agree to release their rights to apply to the court for a share of the other partner’s superannuation, in lieu of the splitting arrangements they have formalised in their Agreement.

Just like a normal Binding financial agreement, your superannuation agreement will only be binding if both partners receive independent legal advice, before signing the Agreement about:-

See more information about the legal review process and our set price service – only $ covers both parties in most cases.

The advantages of using a Superannuation Agreement

Splitting superannuation as part of your financial agreement has many benefits. It means that you stay in control of the process by making your own decisions and choices as to how your super should be split.

By making a private binding Agreement, you bypass adversarial style court proceedings which can be drawn out and costly.

If a private agreement cannot be reached about whether, or how, superannuation should be split, then it may be necessary to apply to the Court for a Court Order.

This Superannuation Agreement Template is provided to you as a Word document. It’s easy to use – just insert your data in the appropriate fields and go to print. The kit includes:-

The agreement you need will depend on several factors

Whatever your needs, we have an agreement template to suit your situation. If you can’t see your document on the list below please call us on 0266725904 or e-mail us and we will provide a link to the agreement you need.

It’s worthwhile noting that any amount transferred under a superannuation agreement will be treated in accordance with the normal rules that affect superannuation benefits. That is, you can’t take it as cash and go on a world trip unless you’ve already retired.

Click on the Buttons to buy the agreement that suits your purpose.

Married, Separated, not yet Divorced

Excerpt from the 90C Agreement (Separation for married couples) 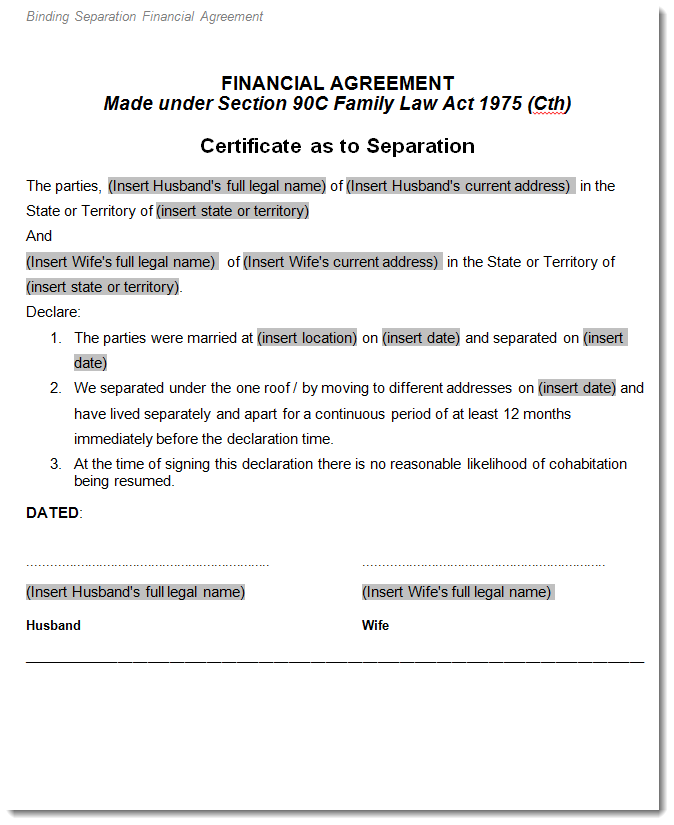 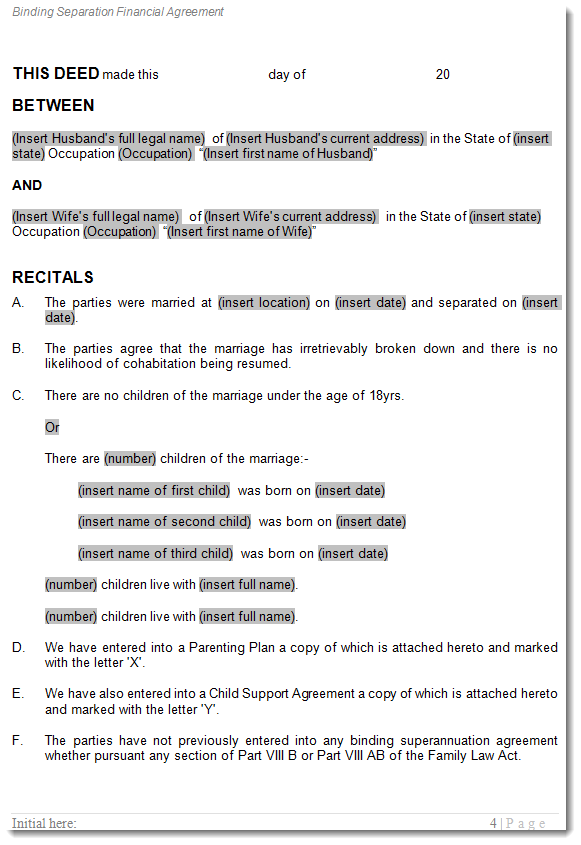 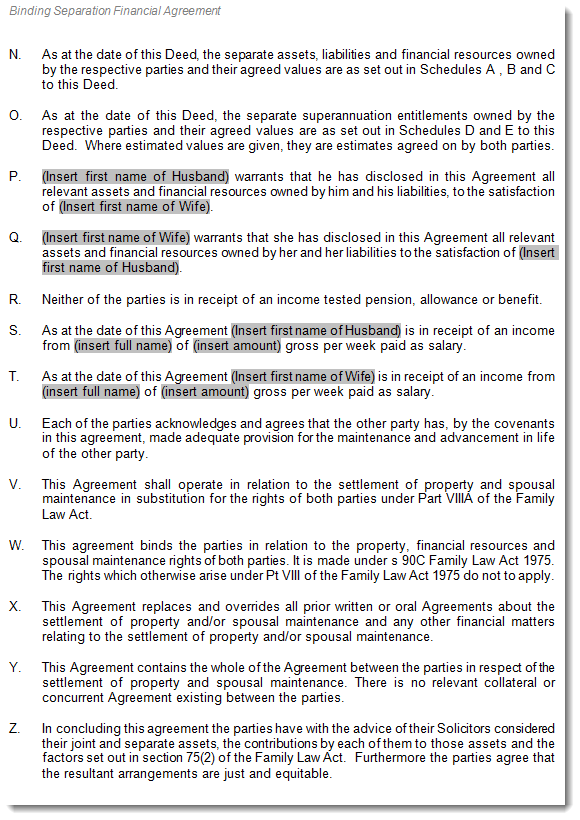 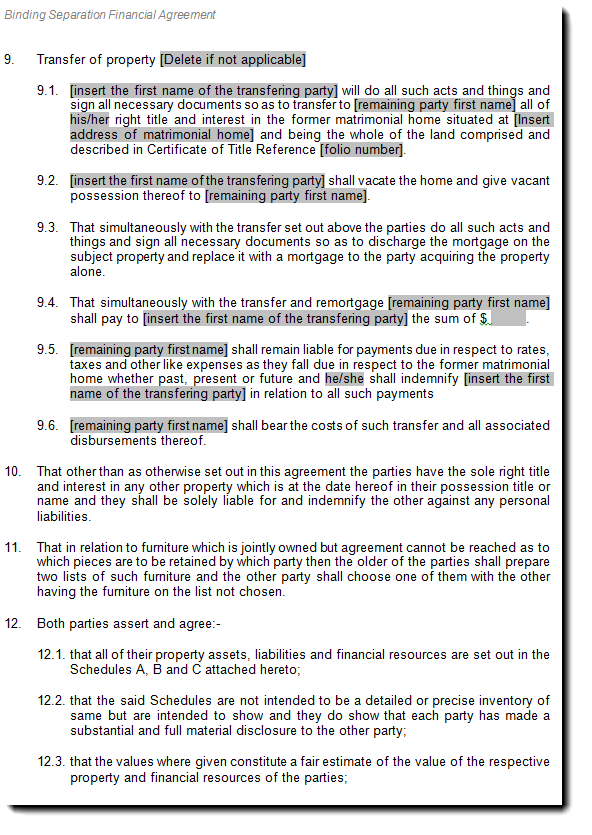 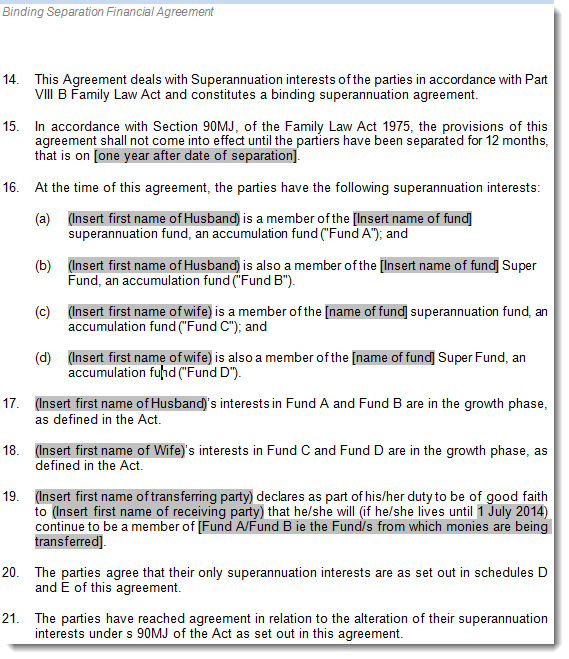 Our fully secured e-commerce system allows you to purchase and download your Superannuation Agreement safely.

Married, Separated, not yet Divorced